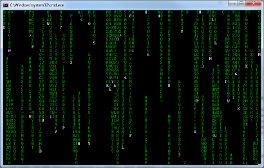 So, I decided that I need my own Matrix Screen. Once upon a time, I downloaded a pretty good screen saver of the Matrix effect. But that was close to a decade ago – and I have no idea where I got it from or where my copy of it went. Therefore, I need a new one.

I realized that with my current coding skills, I could probably write my own in C. It is simply a matter of writing the letters into an array, updating their positions, and printing it out to the screen. The trouble with doing this is that the standard C libraries do not seem to come with ANYTHING to enable me to over-write what has been written on the screen. At best, I can overwrite a single line of text by using the escape. I could also use:system(“cls”);. However, that is – at best – not portable and – at worst – creates a flashing screen that would drive anyone watching it nuts. Actually, the above mentioned method was the method I have used in the past as I have experimented with ASCII graphics.

The solution was to use the PdCurses library (or NCurses when I was compiling it on Linux). This allowed me to implement basic color as well as to redraw the screen without it flashing like some kind of firefight.

Without going into great detail of the specifics of using a curses library, one of the key features I used for this program is the “mvprintw” function. Unlike “printf”, this allows me to move the cursor to a location on screen (in the format Y,X if memory serves me). This means that I can go anywhere on screen (within my console window) and overwrite any character anywhere. So, with the help of curses, I was well on my way to making my own matrix-style screen.

After studying a few different videos featuring this scrolling effect on YouTube, I concluded that the text can flow downwards at the same speed. I also decided that it would look best to make the first digit white. Furthermore, I also realized that to be truly authentic I ought to have some of the letters randomly change while they are on-screen. Finally, All of the text starts at the top – so that is easy – and flows down.

What I did was to create an array the width and the height of my terminal window (a feat that curses helped with again). Then, using “rand()”, I selected a random starting point along the X-axis and then place a random character into that array. Additionally, I put a random string length (for the purposes of this program, I call the falling lines of numbers “strings”) and a string duration. The string number dictates how long the string will be up to a certain minimum value and the duration dictates how long the string will last for.

So then, each cycle through the array, any strings that have a length remaining value greater than 0 AND have a blank space below them (this is how it knows if this “length remaining” value has already been read or not) and has a time remaining value less than the total duration (those are stored as two separate values) creates a new random character on the line immediately below it. This new character inherits that duration value from the previous character and the length (or length_remaining) value decremented by one.

As the program inspects the array, there is a random chance of changing the character stored in the array. When the loop finds a character whose time_remaining value is zero, it erases it and all its associated data.

Once the array has been read and processed, we then need to print out the array. Using mvprintw, this is pretty straight forward. I also use curses to change the leading character of the string (the newest created) to white. It does this by looking at the duration time and its time remaining values to see if it is brand new or not. Then we refresh the screen (rapidly updating in curses without a refresh seems to lead to no output, even though using mvprintw to alter a character here and there but not continuously seems to work without refreshing under certain circumstances) and delay for a set amount of time. And the process begins all over again.

Here is the actual source code (note: source code appears to have been lost), for those that are interested.

The Matrix Franchise are owned by Warner Brothers. No Copyright Infringement is intended.