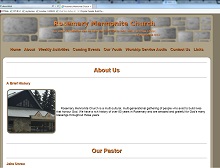 My home church has a website, though I personally am not a big fan of how it looks. To that end, I thought I might try my hand at creating a new one. So I set out to create this page. The header graphics (stones) is somewhat inspired by the stones on the front of our church building – and it was created using a combination of Inkscape and GIMP.

One thing that I did try with this page was experimenting with PHP by setting up a linux based webserver on an old computer at home. I then created text files that the PHP scripts would parse to generate the page content, the idea being that I wanted this sites content to be easy for others to update. To that end, I created a batch script that then uses putty to upload the modified text files via FTP so that all a user would need to do is – once they are done typing the new information into the text files – double click the batch file, type in the website password and everything is updated.

Unlike some of the other pages I have created, I will not include a copy of this one online. The reason is that it is currently using a whole bunch of temporary holder pictures that are probably not licensed for redistribution. (Namely, a bunch of pictures from Google search). The reason I used these was just to get an idea of what the webiste could look like. (The picture you see in the screen shot is actually the picture of our church and not a holder picture).

Overall, it was a fun experiment. Come winter, I might discuss it further with the powers that be at church (and the secretary who does the updating) to see if this is something they would be interested in using.