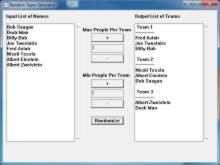 About a month back, we had to pick teams in which to do our accounting project. My professor told us that if we had not chosen a team by a certain date, he would write the names of all the unpaired people on small pieces of paper, put them in a hat and draw them out. In this day and age, I thought for sure that he must be joking. As it turns out, he was not. While there is allegedly an online tool in the system used for generating random teams, from the sounds of it – depending on exactly what you want to do in creating a team – it may not always be the most easy thing to use.

So I decided that I should take a crack at writing my own random team generator. Initially, I thought I would write it as a typical command line application. However, in this day and age of pervasive GUI’s (Graphical User Interfaces), who wants to mess around with the command line? So I concluded that this application NEEDS to be a GUI, with a simple interface that anyone can use with minimal instruction.

But what API should I use to create the GUI? A number of options presented themselves. I could try using GTK2, but that lacks compatibility (at least for the free version) with Visual Studio. I then looked at WX Widgets, and I think one or two other apis. It seemed like pretty well everything had a pretty steep learning curve, made all the steeper by the need to find a way to install/configure the api to work with Visual Studio. In the end, I settled on the classic WIN32 API (I can hear some of you shuddering).

It actually wasn’t that bad, using the WIN32API, though it did highlight a number of things that I need to learn more about (such as function pointers, callbacks, etc). But, after a few evenings work, I had a finished product. The first version was compiled with Visual Studio, but in order to distribute it, I needed to mess around with building an installer file in order to comply with the licensing restrictions of the redistributable libraries required to make it run. At some point, I do need to learn more about this, as I am rather fond of Visual Studio’s debugging environment. But for the time being, it seemed quicker to just reconfigure and recompile the project using Code::Blocks so that I would not have any unmet library dependencies (in theory) when distributing this among Windows machines.

So, without further ado, here is the program for those of you interested in trying it. Please read the README.txt file for licensing restrictions prior to using the program. Your use of the program constitutes your agreement with the terms as laid out in that file.